Talking with an investment banker who’s been on Wall Street for the last ten years, one expects to hear descriptions of long hours, tense negotiations, and the fast pace associated with doing deals. When that investment banker has won two “Deal of the Year” awards from Institutional Investor and been described in a profile by the Wall Street Journal as “brash” and “argumentative,” the last document one expects to hear him quote is the Bible.

“As a Catholic, I had been taught to rely on the truth of textbooks, just like the catechism, and being thrown into a college environment was, at first, astonishing”

For Joe Fichera, the activist philosophy that prevailed in the Catholic church in the late 1960s and early 1970s was a powerful influence that dictated both involvement in social issues and use of one’s own unique gifts. “Catholics are always trying to do what is right,” Fichera says today. “Being an activist is an extension of that philosophy. Catholic activism has lately veered off to single-issue politics. But some of us believe that using your talents to make a contribution of any kind is a natural extension of the activist philosophy. Do you remember the biblical story of the talents? In preparation for leaving on a journey, a master entrusted to his servants his property and gave five talents to one servant, two talents to another, and one talent to a third. The first servant invested his talents and made five more; the second servant also doubled his talents; but the third buried his one talent and returned it intact. On his return, the master rewarded the first two servants and cast the third into the darkness. This story speaks to me not just for the way it relates to use of one’s own abilities and creativity, but also the way it relates to money. It’s not how much money you earn but how you get it and what you do with it that’s important.”

Responsible for new business development within the corporate finance department at Bear, Stearns & Co. in New York, Fichera is not shy about discussing creativity or money. Employed in investment banking since he graduated from the Yale School of Organization and Management in 1982, he is most proud of the instances in which he has been able to bring to a client’s financing requirements a creative new solution. In so doing he has both secured new business for his firm and addressed a specific client need. He has received the most attention (and the Wall Street Journal profile) for his design for Exxon Capital Holdings Corp. of share-adjusted broker-remarketed equity securities (SABRES), a type of preferred stock featuring an adjustable dividend rate and dividend period similar to a commercial paper and medium-term note program that avoids the risks and costs of the auction preferred market. At the time of Exxon’s filing with the SEC in 1988, the $750 million offering was the largest single offering of variable-rate preferred stock in history. Fichera is similarly proud that he has twice won, for his firm, in different sectors, the “Deal of the Year” award from Institutional Investor magazine — in 1990 in the corporate finance category for preferred stock financing, and in 1991 in municipal finance for the repair of a failed Dutch auction debt security. What he enjoys about his work in new business development, Fichera says, is “being pushed to the limits of my creativity — not just taking the plain-vanilla solution but winning the business and adding value by offering a different approach.”

The inclination to look beyond the plain-vanilla solution is a characteristic Fichera says he developed as an undergraduate at Princeton University. The only son of first-generation Italian working-class parents in Rochester, New York, Fichera attended a Catholic military school and volunteered to be bussed to an inner-city, predominantly black high school under Rochester’s desegregation plan. One of only two students from the city of Rochester to attend an Ivy League college, he entered Princeton’s Woodrow Wilson School of Public and International Affairs. This experience, he claims, was pivotal. A scholarship student from a working-class background, Fichera initially felt different from his classmates. Accustomed to tackling academics with ease, he found Princeton scholastically demanding, and had to scramble to catch up. Not only was Princeton a “tremendously arduous experience,” Fichera says it also challenged a lot of his assumptions. “The most shocking experience at college,” Fichera recalls, “was being told that a 300-page book could be wrong — being asked to criticize a book after being told that the author’s premises could be wrong. As a Catholic, I had been taught to rely on the truth of textbooks, just like the catechism, and being thrown into this sort of environment was, at first, astonishing. But then I said to myself, ‘Hey, you mean everything is up for grabs?’ It was, for me, the beginning of challenging basic assumptions and seeking new ways of looking at things.”

Fichera had entered the Woodrow Wilson School in the belief that he would dedicate his professional life to public affairs. Citing the social environment of the early 1970s and the religious environment created by the Vatican 11 reforms of the Roman Catholic Church, Fichera was committed to the notion of pressing for constructive change. “Those were times of involvement and concern,” he says. “That involvement led to a certain idealism, which gave way to pragmatism, to asking yourself how to get done the things you believe in.” Involved in government since high school, he had served as one of two high school student representatives on the Rochester School Board when the city began to desegregate its schools. And at Princeton he had worked as Assistant to the Senate Majority Leader and Chairman of the Joint Appropriations Committee of the New Jersey State Legislature. After serving as New Jersey Issues Coordinator for the Democrats during the 1976 fall Presidential campaign, Fichera joined the Carter Administration in 1977 as Special Assistant to the Assistant Secretary of the Department of Housing and Urban Development. After three years, he decided to leave. “It became clear to me that I would plateau out in government without an advanced degree,” Fichera says, explaining his decision. “I also left because I saw two possible personal outcomes resulting from the 1980 election: if I attended graduate school and Carter won reelection, I would be in an even better position to work in his administration; and if Carter lost to Reagan,” he said jokingly, I could become a Republican and go to Wall Street.” 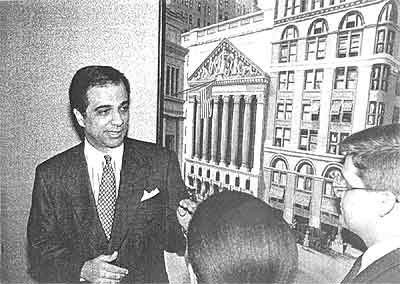 Fichera left Washington for the Yale School of Organization and Management, where he was attracted by the school’s small size and its emphasis on both business and government. He was also intent on obtaining the analytical tools that would allow him to approach problems from a number of disciplines. In addition to his SOM courses, Fichera enrolled in several first-year courses at Yale Law School to try to obtain “the essence of legal thinking.” He says today, “To make a decision and set a course of action, you should have before you as many options as possible. At Yale, I increased my ability to do that. I learned to analyze a problem from the legal side, the economics side, and the organizational behavior point of view. The ability to take courses at other schools within the university creates a real opportunity for a student. One of the great things about SOM is that it’s an integral part of Yale.”

Graduating from SOM in 1982, Fichera joined Dean Witter Reynolds and worked for Smith Barney and Prudential-Bache Capital Funding before joining Bear, Stearns in 1989. Despite his heavy schedule, Fichera has remained heavily involved in Democratic politics. He served on the New York Finance Committee during the 1984 Democratic Presidential campaign, and in 1988, he took a leave of absence from Smith Barney to work on the Presidential campaign of Michael Dukakis. “The Dukakis campaign held long-term significance because, among other things, whoever won that election would have the opportunity to fill three Supreme Court nominations,” Fichera remarks. “I knew that the gains of the 1960s and 1970S were fragile and would be challenged under a Bush Administration.” Fichera focused once again on New Jersey, where he acted as Director of Scheduling and Advance, organizing the political events and speaking engagements for Dukakis and ensuring that scarce financial and manpower resources were used effectively. He has also maintained his involvement in Upstate New York government, serving on the Finger Lakes Regional Economic Development Commission since 1984, a position to which he was appointed by New York Governor Mario Cuomo.

“The work is very much like a political campaign: three stops, four speeches, trying to persuade people to vote for you.”

Joe Fichera currently spends the majority of his time on the road, proposing new financing solutions to potential corporate clients across the country and abroad. “The work is very much like a political campaign: three stops, four speeches, trying to persuade people to vote for you. I enjoy the creativity of trying to match the financing solution to the client, and I enjoy the travel,” Fichera says. “I visit companies in small- and medium-sized cities as well as large ones, and I get to talk with people who are manufacturing the products that make this country work. The travel is important in my profession because it changes your perspective. It reminds you that there is more in life than the next deal.”

Beyond providing the opportunity to design the creative financing solution, the world of finance holds for Joe Fichera two advantages as a career. First, he says, investment banking is one of the few professions in which an individual can leave his job to go into public service and return at a later date. Second, it conveys great financial security. “If you ever truly want to be effective in politics, you need to have some financial independence,” Fichera says. “You also want to have the right perspective on life. If you’ve had to meet a payroll and understand the dynamics of business, you’ll have a much broader perspective from which to approach issues.” In the future, Fichera sees himself continuing in investment banking, yet the lure of politics maintains its grip. “I believe there are some fundamental problems in Washington. I’m concerned about some of the forces that have been at work over the last twelve years, about the philosophies of the people in government, and the role that the quest for money has played. Whether an individual has money is not the question. What’s important is what you do with it and whether you allow the pursuit of money to govern your life. Teaching and writing, which I do in my free time, are important to maintaining my perspective. Involvement in politics is important, as well. At this point in my life, whether on Wall Street or in Washington, I think I can make a contribution.”